That same old stole that we all know and love... 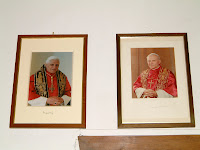 “I also established friendships with Germans: Cardinal Alfred Bengsch, a year my junior, Joseph Hoffner of Cologne, and Joseph Ratzinger, churchmen of exceptional theological competence. I particularly remember the then very young Professor Ratzinger. At the Council he was accompanying Cardinal Joseph Frings, archbishop of Cologne, as a theological expert. He was later named archbishop of Munich by Pope Paul VI, who also made him a cardinal, and he took part in the conclave that elected me to the Petrine ministry. When Cardinal Franjo Seper died, I asked Cardinal Ratzinger to take his place as prefect of the Congregation for the Doctrine of the Faith. I thank God for the presence and the assistance of this great man, who is a trusted friend.”