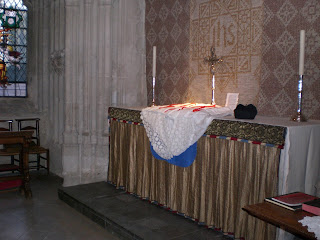 These three photos are rather historical. This past Saturday, January 5, Holy Mass was celebrated according to the usus antiquior Roman Missal of Pope St. Pius V over the tomb of Edward the Confessor in Westminster Abbey in London.
I thank divine providence for the opportunity (grace) to have been there as well as the Oratorian Fathers from London's famed Brompton Oratory for hosting the Mass.
Needless to say, this was a titanic event and a first of its kind after nearly five-hundred years.
During the Mass I though of all the dead who wished and prayed for such an event. All those holy souls who attended the seminary of the Westminster Archdiocese, St. Edmund's College, Ware. Fr. Ronald Knox, a convert to Catholicism whose father was the Anglican Archbishop of Birmingham. John Henry Newman, a priest convert from Anglicanism who was later created a cardinal by the Pope.
Posted by John Paul Sonnen at 4:58 AM

While it is true that this is perhaps the first "Old Rite" Mass to be said in the Abbey for 500 years, New Rite Catholic Masses have permitted at the Tomb of St. EtC for several years.

More inaccuracies, this time regarding the father of Monsignor Ronald Knox PA. His father, Edmund Arbuthnott Knox (6 December 1847 – 16 January 1937) was the fourth Bishop of Manchester, from 1903 to 1921. There is no Archbishop of Birmingham in the CoE. The only archdioceses are Canterbury and York. Knox was, however, one-time
rector of Aston in Birmingham.

Try and get it right, Orbis!

I stand corrected. Many thanks to the love of futility.

Futilitarian is how I view my own posts as sometimes I'm fed wrong (futile or bogus) info.

"One of my friends and distinguished colleagues there was Father Ronald Knox, a convert to Catholicism, whose father was the Aglican Archbishop of Birmingham."
-Treasure in Clay by F.J. Sheen

Glas you mention and I have only discovered this report - St Edmund's College,Ware. The seminary is now in London, but the school is still firmly here with its Pugin college chapel and I am happy to say that we have a number of visiting priests who offer Mass here in the Traditional rite.
A college professor.