Tradition is back, friends, so enjoy... 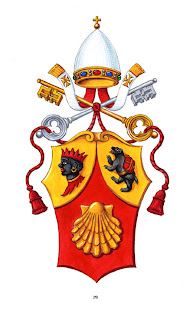 Many of us have an insatiable curiosity about the tiara and how it is depicted (especailly how it is depicted now on the papal coat-of-arms of the B-16 bomber).
Liberals are in a quandary because there is a whole revival of Catholic heraldry and even more young laymen and clerics are now designing their own arms - according to standards of Catholic heraldry.
Here's a taste from the Rome front (my good italoamericano friend M.B. made this all by himself). Many are of the opinion that instead of getting 'rid of the tiara in 1963 (for all the reasons the Pope and the press gave at that time), they should have just gone back to the more original look as depicted here.
Posted by John Paul Sonnen at 1:16 AM