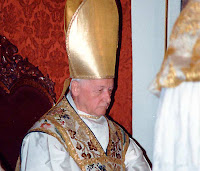 Please pray for the soul of Alfons Maria Card. Stickler who died yesterday. Just this week I was thinking of he and Paul Card. Mayer and how much it must mean to our German Pope to have these two friends and allies as cardinals in residence in Rome - both in their nineties - and all three having suffered the torture and persecution of Nazism, modernism and the other many wiles of their generation.

He was there back in the old days: born into the old Austro-Hungarian Empire in 1910 he arrived in 1930s Rome. He was ordained in the Vatican Basilica on March 27, 1937 (just days after my old confessor, Rev. Richard T. O'Connor, was ordained there on March 19). He survived two world wars and went on to touch so many, many lives. I still remember when on Mothers' Day 1996 he sang Pontifical Mass in the Tridentine rite at St. Patrick's Cathedral in N.Y.C. and it was front page news in the New York Times.

The Lord of History gave him ninety-seven years on this globe. Alfons Maria Cardinal Stickler, son of Don Bosco, pray for us!
Photo from: http://www.kreuz.net/article.6351.html
Posted by John Paul Sonnen at 11:59 AM