My bedroom in Italy... 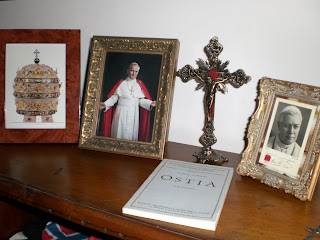 Those who know me know that I have a great devotion to XXth century popes. Yes, I was named after Pope John Paul II and yes, my Confirmation saint was Pope Pius X. But that's only half the story.
You see, my parents taught me this devotion and this is where it has to come from. As a kid my dad instructed me that in his youth, inside the main entrance of his school, there was a big portrait of the Pope and big portrait of the Archbishop and a crucifix in every room of the building.
Catholic youth of the world, set up a cruxifix in your bedroom and collect a nice image of the Pope (perhaps from a postcard) and frame it nice and Baroque!
Posted by John Paul Sonnen at 5:49 AM

And get these holy objects blessed!