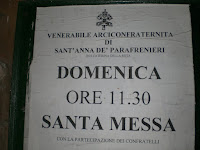 Sixties hogwash was always against the sedia gestatoria.
Today, people are getting more realistic about these things - we see a new blossom of respect for custom, tradition and common sense, etc.
Anyways, this Rome parish was and remains the home of the sediari men. They belong to the very active and very much alive Venerable Archconfraternity of Sant'Anna de'Parafrenieri, located here.
This parish is across the street from the Venerable English College, near Rome's Palazzo Farnese. While there I met one of them, Maurizio Guazzaroni. He started as a young sediario pontificio carrying Pope Paul VI in the seventies. He talked about the last time the sedia was used when they carried Pope John Paul I in 1978.
Then there was the young Pope of fifty-eight years who was eager to mix with the crowd so as to endear himself to the Romans and the like as he was the first non-Italian Pope in 455 years. Thus the last sedia was then later sent to the museum, at the Lateran Palace. Is this the end of the story? Maurizio, vogliamo la sedia gestatoria subito, ti prego!
Posted by John Paul Sonnen at 1:24 PM