What the old altar of the chair in St. Peter's Basilica used to look like... 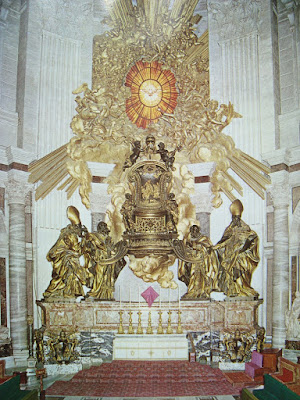 As everybody knows, it was Virgilio Cardinal Noè who as Archpriest of the Vatican Basilica had two altars torn out: this altar of the chair and another in the canons' chapel.
Cardinal Noè was part of that Lombardy clique that came into power in the Vatican in the sixties and swept in to make everything "modern." Even today when he still gives interviews he actually weeps at the name "Papa Montini" because as he explains, Pope Paul was the "greatest" pope the Church ever had.
Posted by John Paul Sonnen at 5:21 AM

One can only hope that the likes of Cardinal Noe are not weeping in the next life, when they find themselves in the same place as their hero Bugnini...

Is Noe (I won't even respect him enough to give him the title "Cardinal") crazy?

Paul VI and the army of liturgical lunatics he brought into power (all of them tried to turn us into Protestants) were among the WORST influences the Catholic Church ever suffered. And Paul VI -except for Humanae Vitae- was among the very WORST Popes the Catholic Church ever had.
Like Bugnini, Noe, and Piero Marini, Paul VI (at least liturgically) was entralled with Protestantism. Much to the detriment of the Catholic Faith and our Holy Mass. It will take decades to eliminate the Protestant influences in the Mass and Catholic traditions.

On my first visit to Rome in 1988, I saw him shouting at a couple of altar boys. I gathered from that, that he could be quite unpleasant when the mood took him.

1. This was a true tragedy against art, culture, and the glory of that magnificent temple, no question.

2. We don't need, however, to imply that Cardinal Noe, or even Bugnini, went to hell; we have no idea whatsoever.

3. If we're going to judge somebody's character on one instance of grouchiness...

4. Can we not make such sweeping judgements, in particular regarding the Holy Father? Was Paul VI really "enthralled" with Protestantism? Paul VI obviously wanted reform, and this was what his experts told him to do; is he evil to trust people who had supposedly given their whole life for the service of God and the Church, and who seemed to have the latest historical/liturgical findings and research on their side? Paul VI was not a bad man, in my opinion, but a weak man in terrible times...

Come on people, let's try to stay positive. Cardinal Noe and Paul VI, and even Bugnini, deserve our prayers for their souls every bit as much as the next guy.

The present altat is an improvment over Noe's efforts but why didn't they just restore the old arrangement?

Jonny, I did say when the mood took him and didn't imply he was perpetually bad tempered; however, his outburst was quite over the top and in front of quite a large number of visitors and pilgrims - very close to the Altar of the Chair, in fact. I don't think it's unreasonable to glean from that, that he had temper "issues".

As for the rest, most certainly I hope he and Bugnini will one day be in heaven. As for Paul VI, Humanae Vitae was one of the most prophetic documents ever written and I am thankful for Pope Paul's pontificate for that, alone.

One of Paul VI confidants Jacques Maritain gave a public interview on French radio in 1993, where he revealed that Paul VI admitted to him privately that one of the chief goals of the reform was ecumenism, especially with Protestant sects such as Calvinism. Why else would Paul VI allow the invitation of six Protestant ministers to advise Catholic liturgists on how to reform the Holy Mass - something that they have traditionally hated and attacked for hundreds of years?

As to your last assertion - I agree with you completely.