Beauty intelligible to all... 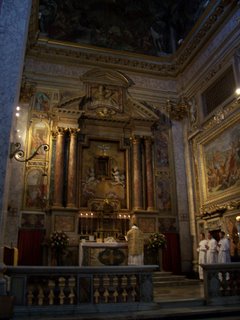 So nice to be an American student in Rome while praying in the student chapel - in Latin - something I never had as a kid in America (more Calvinism anyone?)! All of this I now have in Rome: the sacred science of theology as well as the Latin Rite: both as the Church has given them to us in Her wisdom! Our patrimony is living while outlasting the futility of constant change.

Cold scorn is often poured on things seen by some as being "too" Catholic. There is sometimes even an indignation seen among Catholics for things sometimes seen to have a Catholic "excess." Unsportsmanlike persons might be choking with diffidence at something so Catholic as a Mass in Latin where the cleric and faithful all face God in the tabernacle together.

However, with his broad-brimmed fedora or her Spanish mantilla, the mature Catholic can respond: the Church has given this to us. The Dominican Rite is a fortress of the thirteenth-century. It is wholesale Catholicism. Everything is in its proper place. It is a battery of order. In an epoch where so many liturgies are just a fantasia swirling in a brackish stream of rusticity, we hear the Latin schola rise up from the morning mists of Rome! Thank you, Blessed Lord, for our inheritance!
Posted by John Paul Sonnen at 3:03 AM