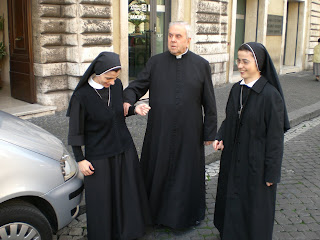 Here's the legend in 2007 (born in 1916). Compare this photo with that of him below in 1944, the day Rome was bombed (notice he still wears the Roman cassock).
In 1956 he was consecrated bishop, in Rome. He has found himself as one of the very last living Council fathers of Vatican Council II.
This coming October will be the twentieth anniversary of the motu proprio Ecclesia Dei. Wouldn't be nice if he, one of the actual Council fathers, might sing Pontifical Mass for us according to the usus antiquior?
Posted by John Paul Sonnen at 3:09 AM