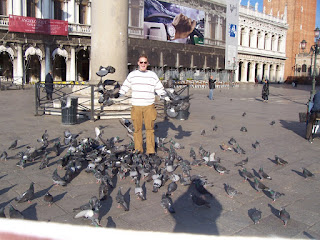 When I was last in Venice as a teen the counsel I received was to never feed the birds. So I then fed them and was dismayed as I got attacked by the lot of them.

This time I wore shades so my eyes wouldn't get taken out. Wondrously, I was attacked again and at first I was confuted, but then just realized that these jackals would never take me alive.

Once it got to be too much I wished I had brought along a liberal tambourine from a charismatic liturgy so as to seize them away.
Posted by John Paul Sonnen at 2:51 AM

Attacked by the winged rats of Rome.