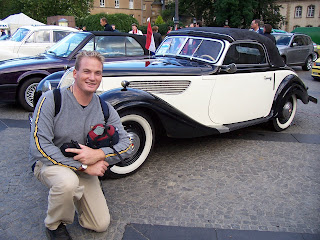 Today is election day in Italy...and tommorrow, too. As the dog-and-pony show continues, the rest of us just shake our heads.
Meanwhile, today was a blast. Thanks in large part to my dad and uncle, a great passion of mine has always been antique autos.
Every year in April they have the mother of all antique car shows in Rome (http://www.fierafuoriserie.com/). Twice I've been there - it's held at Rome's new convention center called Fiera di Roma (second to the last stop on the train to the International Airport).
There were lots of great autos and best of all are the old "Topolino" cars that Italians so miss and my personal favorite, the Jaguar (http://www.aavs.it/).
Yesterday was spent at Tivoli. It's a must for when you find yourself in Rome - you get to see a great Renaissance palace and its gardens with their many fountains (called the Villa d'Este). I tell everyone: go to Subiaco in the autumn to see the fall colors (in early November) and go to Tivoli to see the spring flowers (in early April).
The evening before was spent at a nice "whisky and bourbon roof party" of expats and the like near the Vatican, with a rooftop view of Castel San Angelo. The party was nice, as it poured rain outside. The crowd was interesting. I call it the "Thirty something, still single, but feeling really lucky to still be in Rome" crowd. Always a nice mix: tour guides, a Swiss Guard, a UN employee and persons from several countries, etc.
Tomorrow I'm making a pilgrimage to the miraculous image of Our Lady of Good Counsel in the village of Genazzano, near Rome. I carry all of your private intentions in my heart and I will rest them at the foot of the miraculous image of the Madonna and Child. May God be praised.
Posted by John Paul Sonnen at 12:49 PM