And the Father still makes saints... 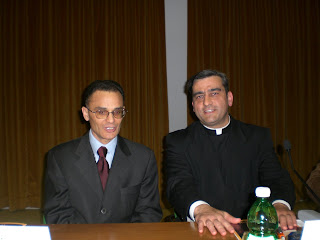 Yesterday was a big day in Rome for the smiling man on the left. It was his wedding day!
Actually, he was wed some years ago and even has four sweet children. But his Nuptal Mass and vows were only just celebrated yesterday as he just converted to Christianity - and was even baptized last month by the Pope!
Meet M. Christian Allam. With great pleasure I had the honor to shake his hand on Monday evening. I found him to be one of the most brilliant, engaging and articulate public speakers I have ever heard: an honest and ethical journalist.
"No wonder he's one of the most celebrated newspaper journalists in Italy," a friend of mine remarked, "As soon as his books are available in English I will be sure to get my hands on them!"
Christian gave a great lecture at Rome's Ateneo Pontificio Regina Apostolorum along with another man, a convert from Judaism. Both gave their testimonies to a packed audience of mostly Italians and some students. In attendence, too, was Archbishop Luigi de Magistris, a familiar face at the school as his nephew is a student there.
Christian arrived early for Holy Mass before the lecture. At every moment he was surrounded by a small army - perhaps two-dozen armed men along with local Carabinieri and Police forces in front of the property with all window shades closed and even yards of felt fabric taped over all windows along his path.
Saints abound. Pray for them as they are many.
Posted by John Paul Sonnen at 9:50 AM