WWII: when the Vatican was bombed... 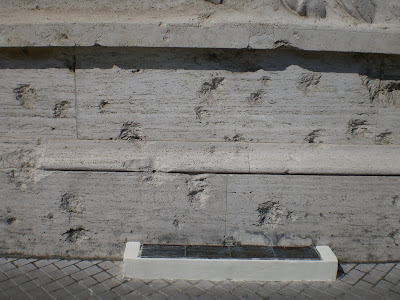 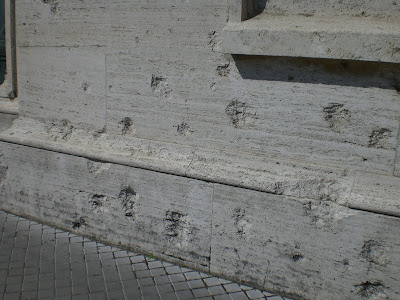 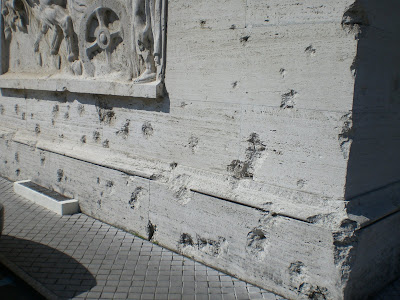 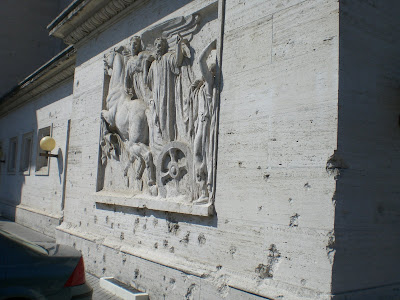 As a story that's never really been told, many don't even know that the Vatican City itself was bombed during World War II. Friday, November 5, 1943 was a quiet morning. Until, they say, five bombs fell on the Vatican from a single, unmarked plane. Here we see some of the remains of that event which they left alone so as to be a silent witness for future generations.
Little has ever been written or said of this event. These photos were only able to be taken through a free VIP tour we were gifted with through our univeristy and thanks to the Governor of the Vatican City State who as a courtesy gifted the Cistercian Abbot in Rome with this privilege. The tour guide that day, who for thirty years has been guiding pilgrims and tourists through the Vatican gardens, allowed for us on a special three-hour tour to get close to the site, now a parking lot. She explaind that no Vatican inquiry was ever made and that the low-level plane was unmarked. It was likely a "top secret" mission and neither the Nazis or Fascists ever claimed responsibility. The building in the photo is the train station of Vatican City, now used as a sort of department store for Vatican employees and others. Today, we know that terrorists seek to control through "intimidation" and fear. It is believed that the Nazi authorities in Rome, taking all orders from one in Berlin, bombed the Vatican itself in this manner during the beginning of their nine-month occupation of Rome so as to further remind all parties of the Nazi power and willingness to go all the way in their path of destruction.
Posted by John Paul Sonnen at 1:56 AM

"...through a free VIP tour we were given through our..."

"...who as a courtesy gave the Cistercian Abbot..."

There is no such word in the English language as the passive verb "gifted".

There is an adjective, as in "He is a gifted child". But otherwise, only new age paranuns use "gift" as a verb.

Yes, this event scarcely gets a mention in the history books. Many thanks for the photos. I've never seen the damage. Fascinating !

much of what is recorded here is from events/conversations exchanged in italian. in italian, there is the word regalare (cf. the latin) which means to give (as a present) and so this is the manner in which this word is translated into our (vulgar) tongue.

...and in English the Italian verb "regalare" translates very easily as

Verbing weirds the language. And if you don't think language important to the revolutionaries, ask them why they don't like to put the definite article in front of "Church".

"We are gifted with church..."

"Thursday, March 2nd (1944)
Last night, at about 8 o'clock, six bombs were dropped near Porta Cavaleggeri, close to the Vatican City by an aircraft flying low. The extraterritorial Colleges of Propaganda Fide and of the Augustian Fathers were hit, while two other bombs exploded near the Palace of the Holy Office. Considerable damage was done by splinters, even inside the Vatican City, where the Cortille San Damaso, Piazza Santa Martha and the railway station suffered."

From "Inside Rome with the Germans" by Jane Scrivener, published 1945.
J. Scrivener is the non de plume of an American living in Rome during the war. A must read!

"Jane Scrivner" notes many of the bombings of Rome in her diary, e.g.
March 8, 1944...this morning a time bomb went off in a lorry..near the church of SS.John and Paul...Tuesday 14 March ...we had the most terrible air raid...waves of heavy bombers... the Tiburtina, Prenestino and San Lorenzo station..Wednesday March 15...yesterday's bombing the Blue Nun's hospital next to S.Stepano Rotondo...Friday March 17th.During an air alarm this morning, at about 7.3o, a shell from an anti-aircraft gun fell in the Vatican City close to the offices of the Osservatore Romano, causing a good deal of damage and wounding two workmen seriously. Was that shell aimed consciously at the Vatican City? It is not improbable...."

From "The Day of Batttle" vol 2 Rick Atkinson... A single thousand pound bomb struck the Basilica of San Lorenzo, first built in the 4th century and considered among Rome's finest churches...(IMHO His books are excellent.)

There's lots of very interesting info out there!

Oh, I forgot to mention that Jane Scrivner was an American nun - born Jessica Lynch, her religious name was Mother Mary Saint Luke. She worked for the Vatican Information Bureau and lived in a convent just off Via Veneto.