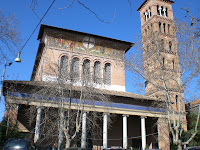 On Saturday, April 19, Darío Cardinal Castrillón Hoyos will sing Pontifical Mass in Rome according to the usus antiquior at the Church of Santa Croce off Via Flaminia (Via Guido Reni).
This Mass is being organized by the Spanish branch of the Constantinian Knights of Saint George in celebration of their patronal feast day.
The parish, built in 1913 under the reign of Pius X, is a twentieth century remake of a Medieval Roman church. The Mass time has yet to be announced. Clergy bring talare e cotta (cassocks and surplices).
Posted by John Paul Sonnen at 7:05 AM

A question: the Order's own website gives the date for the Mass as the 19th of April, a Saturday. I think you had better get this cleared up; I am sure you wouldn't want any number of priests or laity trecking all the way out to the Milvian Bridge only to find that there was no Mass.

I have no idea. What is their site address? The information that I received was from the top, for the Feast of St. George.