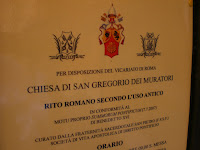 Everybody has been asking for the liturgical update from Rome and so here's the scoop: all is upbound!
The F.S.S.P. continue with their Rome chapel of San Gregorio dei Muratori. This chapel is the only location in all of Rome where one can attend a Solemn High Mass sung in the Tridentine rite every Sunday (http://www.fssp-roma.org/).
Meanwhile, there is now a daily Tridentine rite Mass celebrated each morning at eight o'clock at the Patriarchal Basilica of Saint Mary Major. The Mass is celebrated by a canon of the Basilica.
At the same time, in recent months, flashy new Tridentine rite missals have been printed in Italy for the use of the lay faithful. These are available in soft as well as hardcover in some of the shops along the Via della Conciliazione.
In addition, it can now be seen that some altars in Rome are again being dressed with altar cards, an indication that more private Masses are being celebrated in the Old Rite in public view.
Posted by John Paul Sonnen at 4:34 AM

God be praised - only a year ago, the traditional mass was treated an an exotic and forbidden museum piece. Now it is finally here to stay.

Any news on whether there will be personal parishes in Rome for the traditional rites?

I believe the Institute of Christ the King, Sovereign Priest, has solemn High Mass on Sundays at the Gesu e Maria Church on via corso.

First, I would like to thank you for your excellent and interesting site! The photos are especially delightful!
Since it is clear that you have a love for the Liturgy and in particular for the Extraordinary Rite of the Mass, may I make a suggestion?
It is incorrect to refer to a "Tridentine Rite." Theer is no such thing and has never been refrred to as such in documents of the Holy See. I know that many friends and admirers of the Tradl Latin Mass use the term but it is not in our best interests nor is it in the interest of the truth.
It gives the impression that this is a Mass "made up" after the Council of Tent, just like the Novus Ordo was made up after Vatican II.
The proper term is Tradl Latin Mass, or as the Holy Father and the official documents now call it "The Extraordinary Form of the Roman Rite. For ease of expression I think the term Tradl Latin Mass should definitely be used and "Tridentine Mass" or "Tridentine Rite" or "Old Mass" never be used. Just a suggestion! Thank you again!

Dear JPSonnen,
What are your sources?
According to the sacristan, the tridentine mass was celebrated in S. Mary Major solely on September 14th.

I'll bet you spoke with the Filippino in blue in the sacristy. Those seminarians who work there have no clue and so have put an imposed obscurity on the Tridentine Mass there. I can just imagine the friar: "Huh, what Mass in Latin?"

I saw it there over a week ago in the side chapel with the big cross on the right when facing the main altar. I'll go tomorrow morning and make a photo.

The FSSP are the only parish in Rome where there is the exclusive use of the 1962 missal and there is no news that this will change anytime soon.

Yes, the ICKSP has a Sunday Mass in Rome, but it's a Low Mass, in an Augustinian parish.

Yes, there are several names for the forma extraordinaria or usus anqiquior or whatever anybody calls it any language...

will be in rome in the next few days and would like to attend mass at san gregorio.


how do you get there from the vatican basilica or from the piazza navona?
thanks for the blog

Dear Anonymous,
The wicked will find a way to distort the truth about the historical rite of Mass, no matter what we call it. Check out Rorate Caeli's current reports on the Italian liturgist Manlio Sodi, e.g.! And they might just as easily say, if we call it the "traditional Latin Mass", that enough things were changed after Trent that it is not the same tradition. I once read an article by someone seriously contending that a minor change introduced by Clement VIII in the 1590's meant that the "so-called Missal of S. Pius V" was only in use for 20 years.
Optima quaeque!

Can you confirm the report of a Mass to be celebrated in usu antiqiore by Mons. de Magistris in St Peter's Basilica on 10 November ?

Or is it just a rumour ?

to get to san gregorio, find piazza nicosia on a map and from there walk down the via leccosa to the end (near the new ara pacis along the tiber).

as soon as i get a definite on a big tridentine rite mass in rome i'll post it promptly with photos to follow. thanks...

I CAN'T WAIT TILL THE HOLY FATHER CELEBRATES THE TRADITIONAL LATIN MASS IN ST. PETER'S BASILICA ON A MAJOR FEAST DAY LIKE CHRISTMAS MIDNIGHT MASS WITH THOUSANDS IN ATTENDANCE AND 10'S OF MILLIONS WATCHING WORLDWIDE. THAT KIND OF SIGNAL TO THE WORLD AND TO CATHOLIC PRELATES & PRIESTS IN PARTICULAR WOULD BE A STRONG MESSAGE THAT THE HOLY FATHER, POPE BENEDICT 16 TH IS VERY VERY SERIOUS ABOUT WORLDWIDE IMPLEMENTATION OF SUMMORUM PONTIFICUM, THE RETURN OF THE TIDENTINE LITURGY--PACEM

Had the pleasure of being in St. Mary Major's this Sunday morning (4th Nov) for 8 am. Was eager to experience the glory of the extraordinary rite of the Holy Mass in such a setting. Unfortunetly there was no such luck - as far as I could see it was not happening. Went to the 8am N.O. Mass in the left-front side chapel as you face the high alter. The mass started about 10 minutes early for some strange reason.