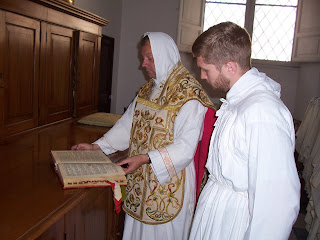 Okay, everybody has been asking and yes, the story is current but not yet authenticated ( = a rumor), that again this academic year there will be scheduled a public Dominican rite Mass each week at Rome's Dominican University as there was previously for a time.
The gossip is that there's a friar from the Provincia di S. Pietro Martire in Turin that will be the regular celebrant. In fact, somebody even told me that somebody has written the Maestro Generale (Magister Generalis) to invite him to sing the Mass once or twice with the student body...as the world turns, friends!
Posted by John Paul at 12:46 AM

Nice, but hope the kangaroo court won't put a stop to it, ha?

God bless you all and enjoy this gift. I tarried at the Angelicum as a student in the Jubliee Year. Foremost this is a gift and most favorable. One can only imagine the fragrant incense and Latin chants in that chapel!

Nice to hear of this treasure on that continent whose fate hangs in the balance. Surprised I find myself that it doesn't stir the fury of (the now elderly) Dominicans who are (forever) against it (their fear is odious). One would think that they would not view it as a puny little affair but as a grand conflagration! The older generation has so ill-treated this rite in that they have put it into their battle of ideas set within the limits set by the mood of 1968 and even before. Typical that it has found favor with the youth and that they don't seek to appease that age that lost splendor to the cultural demolition.