Where I was born on the globe... 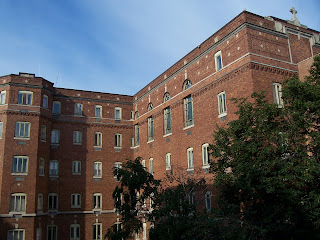 I've always loved the American Upper Midwest. Frederick Jackson Turner had a hypothesis that the upper Mississippi Valley produced this country's most creative citizens. Anyways, it was here that I was born on the upper banks of the mighty Mississippi River.
Today, as I stand in downtown Saint Paul overlooking the steep sandstone bluffs atop the river, I think of this hospital that was founded in 1853 by the Sisters of St. Joseph of Carondolet (the town they came from in Missouri). I remain indepted to these same CSJ sisters who were so kind to me during my later visits to the hospital to visit my mother who had been a nurse there since 1963. May they be rewarded (Lord grant them holy vocations!).
Posted by John Paul Sonnen at 10:49 AM