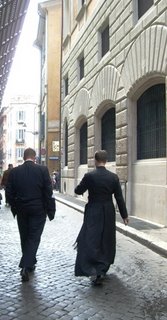 Isn't it just glorious to see a cleric stride over the cobbles of Rome? It's such a thorough image: the Church remains! The street is a niche for the cleric: witness to the common folk! Ever eager to propound the truth, his cassock is his voice. Like my mother always used to say: "Put your tools to work for you!"

We live in an era of anti-Catholic screed. While the mainstream media in America seeks to denigrate the Church with their liberationist agenda, we exclaim to these secular leftists with their Masonic tyranny: "Hey dudes, your virulent and bogus anti-Catholic firestorms haven't sunk the Holy Roman Church yet now have they?" To my fellow Catholic warriors I exclaim: "Die another day!"
Posted by John Paul Sonnen at 8:21 PM