Cursus Theologicus...but where to study? 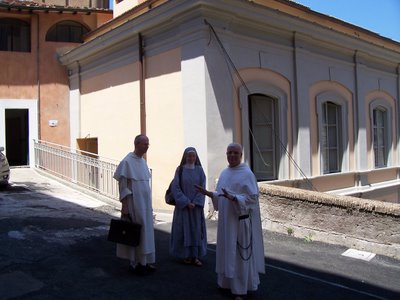 Study here in Rome with the Dominicans or elsewhere? Rome or Louvain or Laval or Paris or Lublin or Innsbruck, etc.? It's vocation and you have to go where you're called to go. However, it sure is fun to study under the Thomistic masters at the Dominican University in Rome! Here, Saint Thomas still rules the roost!

I first studied Philosophy and Theology at the University of Saint Thomas in Saint Paul, Minnesota. The few elderly professors in the philosophy department while I was still there in the late 1990s had been educated at Laval in Quebec, Canada. Until the fractured 1960s Laval had remained Thomistic.

Thomism is the right direction for us only because Thomas is so complete. Just see an index of anything Thomas ever wrote. The foremost American prelate of the XX century, Archiep. Fulton J. Sheen, often said that he had read, "every single line" that Saint Thomas had ever written. Might I do the same?
Posted by John Paul Sonnen at 11:03 PM