Warriors for the cause: arise... 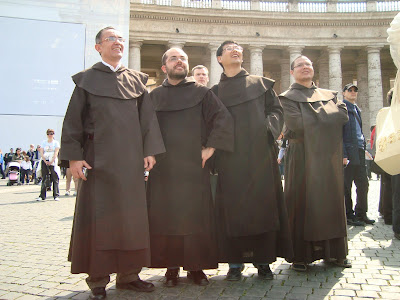 Posted by John Paul Sonnen at 9:51 AM

Notice that except maybe for 1, they are all young friars below 40.

I've noticed in trips thru the USA, and to other places recently that it is the YOUNG priests, monks, friars and nuns that love Catholic tradition and the traditional Mass and the traditional habits.
The "old guard", those 50+ are more likely to be slovenly dressed in open neck clergy shirts, on in layclothes. And it only seems to be nuns in their late 60's thru 80's and over that are the same bitter femminist miliants in layclothes. Young nuns in traditional habits tend to come either from new vibrant Orders, or from conservative communities that never changed much. They were wise.

God bless these good Carmelite friars. I hope that more and more we see the holy habits of friars, and the "old fashioned" style habits for nuns making a strong comeback in the streets of Rome, in Italy, and elsewhere.

To see these wonderful expressions of Catholicity in Rome and Italy as you post so often, I would never want to come back to the boring, basically Protestant inspired USA if I didn't have to.

Yeah I agree; it does appear that they have put on the habit for their attendance at the Holy Father’s Angelus. Notice the one on the left with his layman’s open neck shirt clearly visible. There is no real sign of true Catholic tradition to be seen in this image.

How sad. And for a minute, I was cheering that at least some friars wear the habit.

You're all right. Totally phoney.

many fiars here in Naples for instance wore unremittingly the habit but always underneath trousers and shirts. That it is quite common and not an abuse.

how does their vow of poverty allow for going to the shops for trousers and a shirt?Did padre pio?s

St Padre Pio wore only what the Order gave him a vest or loose under shirt and underpants or long johns and the holy habit.

Friars in the old world have always worn thrift store cloths under their habit.