The mighty "galero rosso" with its 30 tassels! 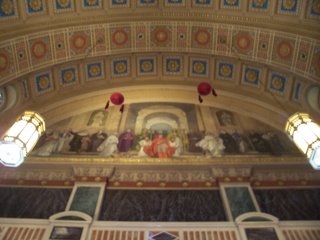 Everytime I enter a cathedral in a cardinalatial see, I look up to try to find the hanging galero hats (it's actually kind of fun)! The best is to see Cadinal Spellman's galero in N.Y.C. (his was Pacelli's!) or even the ugly one they made for Bernardin in Chicago!

The galero was presented (until the updating era of the 1960s) in public consistory to every new cardinal. When the cardinal would die, it was carried before his coffin and then placed at the base of his bier during the funeral rites. Then, it was hung from his cathedral ceiling to denote that once a cardinal (now dead) once had jurisdiction there. The joke was that as soon as the hat would eventually drop to the floor some day, then the prelate would enter the heavenly kingdom!
Posted by John Paul Sonnen at 5:30 PM