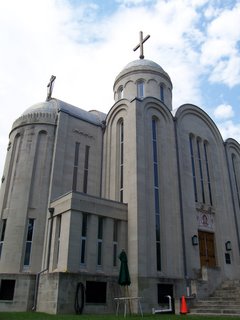 The eye-catching pictorial detail of these traditional old churches is great (they actually have a Catholic ethos)! The evolution of American church architecture is sometimes fun to see. By the end of WWI, English parish Gothicism was losing its exclusive hold on church design. Other archaeological strains were being looked into (with the growing pull of the commercial styles - boo!). They say that Romanesque work, with its brief insurgence, probably was because it so naturally supported the 1920s fascination with the interaction between roughly blocked-out forms and finely executed detail. The church in the photo is a tour de force of eclectic archaeologizing - American craftsmanship!
Posted by John Paul Sonnen at 2:41 PM

What and where is this church depicted in the photo?

brother:
the church in the photo is russian orthodox. i took the photo in washington, d.c. the church is located on "embassy row," just up the street from the naval observatory (home of the vice president).