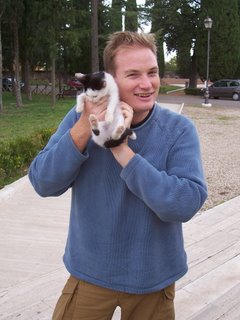 Cats just love me! I’m known as “Il Gattino.” But do you like my pet kitten? I named him “Moses.” I’m told his friends just call him “Mo” (which is short for “More” as in “More Money”). He likes his home amid the ruins of Hadrian’s old Villa near Tivoli.

My last cat was named “Ramie” (named after an Asian perennial plant). It used to claw other cats in battles atop a wall under my balcony (their screams sounded human). I always figured she would die of rabies or a claw wound to the eye. My neighbor lady, who looked like La Befana, used to feed the cats while saying to them: Parlami d’amore!
Posted by John Paul Sonnen at 5:07 AM

why not the name ranthers?

Ranthers? Very anonymous.
Love the kitten! How cute. Old Befana is our favorite book right now. Think she'll stop by here on Epiphany even though we're not in Italy? That has been the big question.

I hope you get your cat desexed.